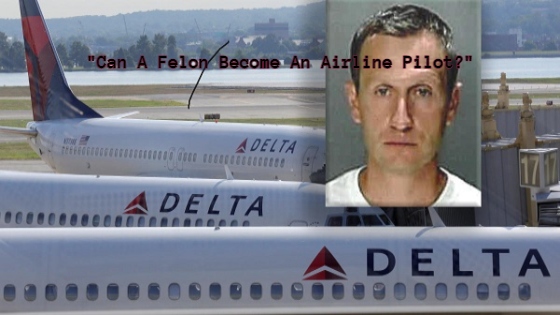 When you enter an airliner do you ever think, “Can A Felon Become An Airline Pilot?

Losing your freedom is not a fun thing to happen in life.

Especially when it comes to flying. People lose a lot of freedoms once convicted for a felony but what about flying?

“Can a Felon Get a Pilot’s License?”

A felony may prevent you from becoming a pilot. It may cause you to lose your license if you are already a pilot.  The FAA in its Infinite Wisdom may give some leniency depending on the offense.

My most prized possession without question is a pilot license.

It afforded me a good life and one that I am grateful that it gave me a living. It was my greatest confidence builder and I sometimes wonder how I ever made it through.

One felony, a couple of D.U.I.’s, one drug charge, and it might have been over.

I do not mean to say that I was inclined to break the law but one drink too many may build a library full of paperwork. No fun.

The FAA does have some leniency in approving a license to fly but it is best to maintain a clean lifestyle because they aren’t people who play nice.

They do not always take the license. They take your medical certificate and you may be told to forfeit your license.

The best way to beat the big bad wolf is this. Be of “Good Moral Character”

Not all crimes will prevent you from getting a private pilot license, but they may prevent the opportunity to fly as an airline pilot.

For any type of pilot certificate, it is required that you obtain a medical certificate, and drugs and alcohol are likely the most common.

My experience with the FAR’s (Federal Aviation Regulation) is that they are open to interpretation so the term, good moral character is ambiguous as hell.

What I mean is that if you were a bad boy in the past you might get the Feds to use some leniency. Let’s explore this further.

2. What Will Cause A Medical Certificate Denial?

Having poor health obviously but we are looking at legal denials.

There are a few really bad things you can do and if you are caught and convicted I do believe it would be a waste of time to try to get a medical certificate.

You will not have much freedom nor a shot at getting a medical certificate and a pilot license.

Anything related to drugs or alcohol can get you an immediate disqualification. It is not a good idea to put yourself in that situation.

But there are exceptions that relate to drugs and alcohol which may be given some leniency by the FAA. Each situations different.

Don’t decide that terrorism is a vocation.

If you get a conviction of some sort that involved treason, sedition, firearms, murder or making bombs to list a few, then you might want to become a lawyer.

Many years ago I met a pilot who was flying freight for a well-known Part 135 carrier that had 3 D.U.I’s. His main concern was getting on with a Major Airline.

He cleaned up his act and did all the things that were necessary and managed to move into a very high-paying position flying a corporate jet.

Even today if you screw up you can clean up and give the FAA all the paper that the system calls for. Show you are a good boy and you just might get away with some mistakes. But not all.

Some problems may require an attorney to help negotiate with the Feds. You can read about many types of problems where an attorney may be the best route to saving your career here.

4. Some Things To Know

It is always better to know the facts before you get into hot water when a pilot license is concerned.

The FAA will do an extensive background check so it is a good idea to be upfront at all times. Sealed records will be scrutinized.

A false statement places you in an immediate revocation. A revocation can occur if you are a student pilot or private pilot and you get caught charging for your service.

You also can’t fly on a suspended license and that becomes a revocation. Don’t think you can fly under the influence as that is just really foolish.

The last detail here is three driving violations under the influence in a one-year period.

There was a recent article about a commercial pilot who flew a drone near a public event and got caught.

He was lucky that a charge was not filed by local police but the FAA saw it differently and suspended his license for 3 months.

That is a long time with no work.

It’s always the best practice to do the best you can to be the best person that you can if you want to be a commercial pilot.

Things to do happen in life and it’s important to remember that you need to handle situations as quickly as possible.

Don’t give up the hope that you can get a commercial pilot’s license unless you have really committed some stupid offenses.

I have been down the road of trying to fight a battle with the Federal Aviation Administration and it is not a fun process.

It’s very slow and my issue was not anywhere close to an offense for alcohol or drugs.

The slightest little variation from the rules can result in very unpleasant circumstances.

IF you find yourself in an unpleasant situation that the FAA might discover, DO NOT just be silent. Face it all head-on and the result will be a much more positive experience.

Flying is always about safety.