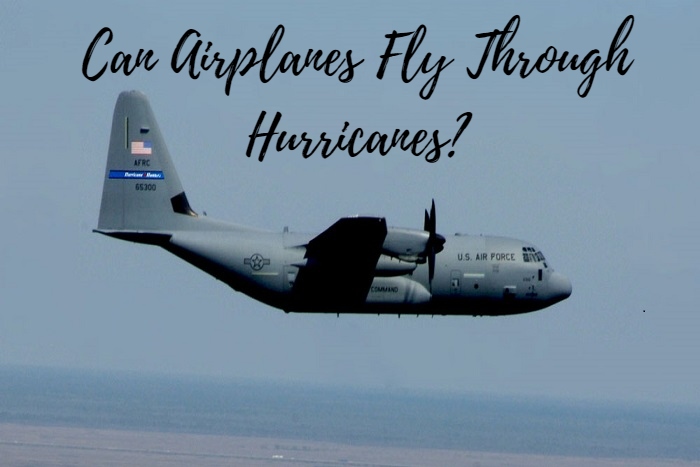 It seems that aircraft can fly through all kinds of weather but have you ever thought, “Can Airplanes Fly Through Hurricanes?”

It is not something that would just pop into my head and decide that I am going to go fly through a hurricane. We have all seen the tremendous damage they inflict upon us.

Can Airplanes Fly Through Hurricanes?

Yes, they can. Airplanes have been flying through hurricanes since 1943 when an unauthorized Air Force Trainer flew into the eye of a Category 1 hurricane. Commercial airlines do not fly into hurricanes but the U.S. Air Force Reserve continues exploratory flights into hurricanes and cyclones each year.

In Sept 1945 a B-17 Flying Fortress which was the aircraft of choice for weather reconnaissance in WWII assigned to the 53rd Weather Reconnaissance Squadron flew intentionally into a hurricane. These flights soon became the primary mission for the 53rd Squadron.

The aircraft were deployed from Canada to Florida and to the Azores, a mid-Atlantic region of Portugal. Since the satellite had not yet come to fruition the aircraft flew daily missions to collect weather data for the Air Force and the U.S. Weather Service for weather forecasting.

The flights into the highly dangerous weather phenomena of hurricanes began the weather forecasting for the post-war years.

Thus began the around-the-clock monitoring of tropical storms and hurricanes on June 17, 1947, creating the first early warning weather advisories needed for the weather service. The Hurricane Hunters were born.

The B-29 Superfortress became part of the 53rd and hit a home run by flying into the tops of the hurricane clouds at 22,000 feet MSL and concluded cloud tops at 36,000 feet.

The Squadron was deactivated for 3 and one-half years and reactivated in February 1951.

The famous PBY Flying boat was also used in the early years.

These years saw the Squadron operating out of Bermuda and then the majority moved to Burtonwood AFB in England leaving one aircraft in Bermuda.

By 1955 the B-29, designated WB-29, ()W for weather began to see the end of its useful life due to corrosion and the WB-50 became the new airplane with 3500 HP engines and a taller tail but very similar to the 29 in appearance.

These powerful machines were chosen because of the safety margins but nevertheless, the  WB-50 suffered 13 losses and claimed 66 lives in their 10 years of use.

In March 1960 the Squadron was deactivated for a year and a half and when reactivated the WB-47 Stratojet became the aircraft of choice.

Fast is not always better in weather work so the airplane could only skirt the edges of the storm and was unable to penetrate into the eye of the storm.

This airplane was discontinued after 10 years and in 1973 the first of the Hercules WC-130 aircraft came on the scene and has remained the workhorse of the Squadron to this day.

The Hurricane Hunters today belong to the United States Air Force Reserve and the new addition aircraft joining the Hercules is the Gulfstream GIVE jet. added for high-altitude weather work as well.

You can read more about these famous Hurricane Hunters here.

Their story is also told as a documentary on a reality TV show on the weather channel.

Although it seems as if it is safe flying through hurricanes by watching these brave crews navigating within a storm but it is really a stressful job.

Hurricanes are really more docile than thunderstorms because they do not contain embedded tornados, severe wind shear, and massive hail. They are both very dangerous.

It is imperative to remember to avoid these storms with a wide berth.

The history of aviation is fascinating and I love reading about its successes and failures.

We know that it is possible to fly through hurricanes but ill-advised without proper aircraft.

Weather satellites and radar help us navigate around severe weather and if it is really bad flights are canceled.

There is just not any reason to place anyone in peril in an aircraft today by flying anywhere near severe weather systems.

RELATED: Can You Fly Through Thunderstorms? ( 6 Thundering Thoughts )