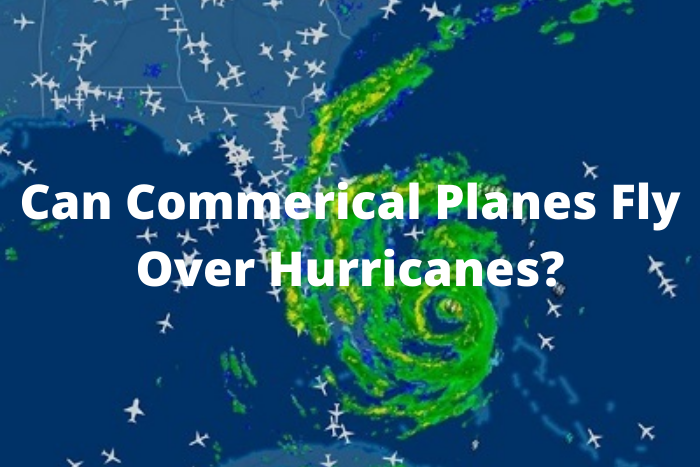 A commonly asked question is, “Can Commercial Planes Fly Over Hurricanes?”

Pretty much all commercial flights will have to deal with inclement weather conditions on a regular basis.

But, the safety of the pilot, crew, and passengers is foremost.

Can Commercial Planes Fly Over Hurricanes?

Every once in a while a commercial plane will have to come face-to-face with a hurricane.

Allow me to reveal all.

Can Commercial Planes Fly Over Hurricanes?

Commercial planes certainly can fly over hurricanes. You’ll find that airplanes have been specifically designed to withstand all types of weather conditions, and many captains and crew can attest to the fact they have flown over a hurricane.

Aircraft design has come a long way since the days of the Wright brothers.

Aircraft are built to withstand incredible amounts of stress before there is a failure. As an example, a Boeing 787 wing will flex 26 feet upward before it breaks.  The design limits for maximum stress calculations for anticipated wing experience in flight are multiplied by 50% more for safety.

When you first enter an airliner it doesn’t likely come to mind just how much goes into making one of these massive machines. There are over 310 miles of wire in a Boeing 787 all run through the fuselage with all of the other components for the operation of this airplane which constitutes the cabin of the aircraft or the pressure vessel which is tested to 150% of its expected level in service.

Today’s airliners are all pressurized meaning that it isn’t necessary to wear oxygen when you fly at high altitudes because the cabin is at a level below 8,000 feet where you can breathe normally.

A Boeing 737 flying at 35,000 feet would probably have a cabin altitude of about 6500feet. This means more air must be pumped into the cabin to accommodate keeping the pressure altitude low therefore there is considerably more pressure inside the cabin of the airplane. So it’s necessary to make sure that the airplane can withstand those pressures. We’ve all heard of rapid depressurization and people getting sucked out of an airplane at altitude when it gets a hole in the cabin or pressure vessel.

It is safe to say that an aircraft will withstand any type of weather situation it may encounter.

2. Many Captains & Crew Can Attest to the Fact

Although I have flown through many thunderstorms and flown many trips throughout the Caribbean and the Bermuda Triangle I have never had to fly anywhere near a hurricane. But other pilots certainly have. Many of them

Author and pilot Tom Bunn talks about flying over hurricanes and looking down upon the eye.  An ex-Navy pilot states that flying over a hurricane “isn’t all that challenging at all”.

Another pilot states that there was “minimal turbulence”

Do keep in mind that airlines will do everything they can to possibly avoid any type of serious or severe weather.

Hurricanes can spawn some very serious thunderstorms and adverse weather. These thunderstorms can create tornadoes which are the most dangerous weather an aircraft can encounter in the air

Escaping a Hurricane in a Delta Airliner

3. It Depends on the Height of the Hurricane

For the most part, hurricanes are low altitude weather phenomena however they have been reported to have exceeded 50,000 feet.

Hurricanes begin with warm moist air rising over the ocean and colder air replacing the warm air as it rises. This can often create a tropical storm which is a low-pressure area that continues to become stronger and is defined as having wind speeds of 39 to 74 mph. These storms often create hurricanes.

Hurricane clouds reaching 50,000 feet are not conducive to aircraft traffic due to the fact that our commercial airlines fly in the mid 30,000 level.

Airline crews have the most comprehensive weather information available in the world. There is a team of individuals involved in the weather decisions of any flight, but remember it’s always up to the pilot in command.

Airline flight dispatchers will advise the crew of any weather en route. This is the major part of pre-flight planning and once the aircraft has departed air traffic control has sophisticated equipment for weather analysis as well.

Airliners are equipped with the state of the art equipment for weather detection. The new age avionics installed in the aircraft can even depict turbulence and lightning as well as areas of precipitation which constitutes the most prevalent areas of concern to an aircraft en route.

5. The Pilot in Command Can Request Deviation Due to Weather

The pilot in command of an aircraft can make any decision relative to the safety of the flight at any time.

If an aircraft is en route to a destination encounters weather that has not been reported, may at his discretion request a deviation from the flight plan to avoid the weather.

A good example of this would be a large formation of cumulus clouds or an indication via radar that there is a large area of precipitation in the path of the aircraft.

The captain can then request ATC (air traffic control)  for permission to deviate from the present path of the aircraft in order to avoid inclement weather.

The safety of the aircraft, its crew, and passengers is always first and foremost.

So, as you can see if it is indeed possible for a commercial plane to fly over a hurricane.

In fact, many captains and crew can attest to the fact that they have done this numerous times.

However, the height of the storm must be taken into consideration.

Often, a hurricane can exceed 50,000 feet in height, which is higher than a commercial plane will fly.

In these instances, air traffic control and company dispatch can plot a course around these severe weather conditions.

But, the final decision on whether to fly over or around a hurricane rests solely with the pilot-in-command.

Aircraft deviation due to hurricane in the Caribbean