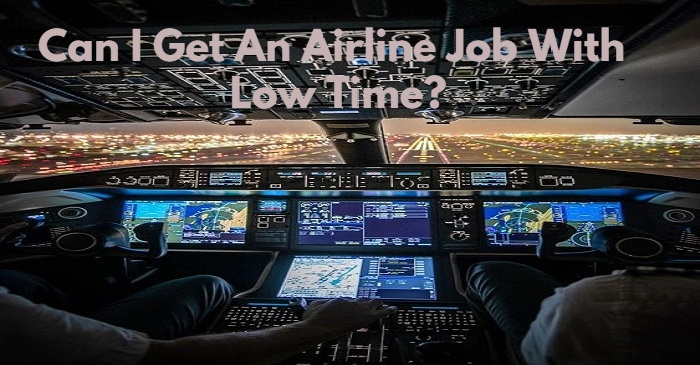 Every low-time pilot that has ever had a desire to fly for a living has asked themselves the same question over and over.  How do I build quality flight time and how do I build enough time to qualify for a job?  Can I get an airline job with low time?

Can I Get An Airline Job With Low Time?

Never has the opportunity been more significant in the past 50 years for a low-time pilot to find a job as an airline pilot. Today almost every Airline has a Cadet program that will take you even with zero hours to 1500 hours and train you to become an Airline First Officer.

Can I Get An Airline Job With Low Time?

1. Where Should I Look For A Flying Job?

Every low-time pilot knows about all of the pipeline jobs, aerial photography, and flying skydivers to name a few.

But none of these jobs give you any stability or real knowledge of how many hours you might be able to build. And if you’re not flying every day you’re not going to get there until you’re an old man.

I’m not trying to knock any of these jobs here I’m just saying that it’s hard to build time and you don’t get paid what you’re worth. At least from my experience.

If you’re serious about becoming an airline pilot then you might want to read on.

Mesa Airlines has probably the most innovative and progressive program for the development of pilot careers.

The program requires Commercial Instrument pilots only. There are ways for people with no experience to begin a career as a pilot with other Airlines.

A Pilot who is lucky enough to be successful in being chosen to attend Mesa’s pilot program will receive a cost-effective way to build the 1500 hours necessary.

These guys are going to use Pipistrel Aircraft’s Pro Alpha Trainer which is a two-seat high-wing airplane.

This airplane has FAA certification and there are over five hundred of these trainers flying around the world presently.

They are economical enough that they will allow Mesa to charge you 25 bucks per hour for Flight Training and you can fly up to 40 hours a week. There are also no upfront fees.

They have financing programs in place that will allow you to pay back the money over a three-year period of time after you are employed.

Graduates will be employed in the Regional jet or the Boeing 737.

So far Mesa’s program looks the most intriguing to me because it’s a flow-through from Mesa Airlines to United if you choose to go.

Skywest has a good Pilot Pathway Program that gives you an opportunity to have an interview for a First Officer position during hiring periods. You also have increased seniority in ground school.

The program has associations with other companies that give tuition and/or sign-on bonuses on successful completion of ground school.

You must be in a flight instruction school or campus until you meet Skywest’s Airline Transport standards.

A dedicated airline pilot candidate needs to invest in their future and United has an opportunity that allows you to become a United Pilot with no experience.

They will help you complete your Private through your ATP. The Private is free but you will pay for the remaining costs of training.

You are given exceptional financing options to cover your training.

The Training is conducted in Phoenix with individual living quarters or you can choose to live off campus at your own expense.

Remember that you must be completely dedicated.

I will tell you from experience that if you want to fly as a Captain with United Airlines you will need to jump through lots of hoops to get there no matter how you get to ATP standards.

You have an exceptional chance of getting to Captain with United with this program.

American is offering an opportunity to fly with the largest Airline in the world and find a career as a Captain.

This is an excellent offer for a job as a Pilot with one of the three wholly-owned American companies, Envoy, Piedmont, and PSA.

You then have a flow thru program to the right seat for American Airlines.

The cost for this training is $99,000.00 and it is one of the most intensive training programs but once again after getting all of the ratings you must build time.

You must meet ATP standards to move into the right seat on any airline.

Every Airline has had to create some type of recruitment program that will fill empty Captain seats.

Frontier Airlines has a two-year program that is partnered with ATP Flight Schools so the cost is in excess of $100,000.00.and 35 candidates per month will be accepted.

Southwest Airlines has a four-year cadet program that costs $101,50.00 and all can apply. There are no set parameters.

JetBlue’s training is thru the CAE academies and I suggest taking time to read thru their pilot training program especially if you want to fly for a foreign carrier.

You must have reached ATP standards to qualify for an airline job and it is very unlikely that the FAA will relent and lower that standard.

If you believe that you can become an Airline Pilot then study the company you like best and by all means APPLY.

The time is perfect to achieve your goal but be prepared for a lot of hard work. Just do not give up.

Invest in yourself and you could be an Airline Captain within 5 years making very good money!

Remember that a 1500-hour pilot is a low-time pilot.

Related: Who Has The Best Pilot Job? (Some Insights In Career Flying)