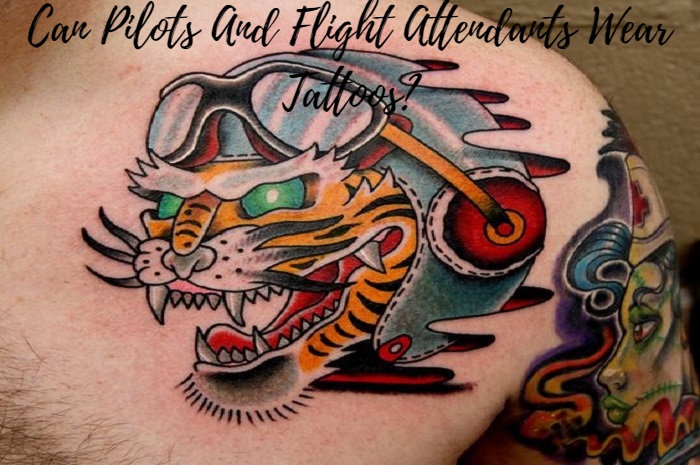 In today’s society, the Tattoo and piercings have become extremely popular. The question for those wanting an Airline career maybe is Can Pilots And Flight Attendants Wear Tattoos?

Yes, they are now allowed with exceptions. As of Sept. 2021, United Airlines became the first U.S. Airline to relax its tattoo policy. They now allow visible tattoos that are unoffensive and no larger than their company badge.

Pilots and Flight Attendants have been glorified since the beginning of airline travel.

It is not a surprise that the companies and the public expect them to look their best.

That trustworthy look has always been maintained and anything that may jeopardize that image is frowned upon as many of the traveling public want that image maintained.

New policies may take some time to be accepted and perhaps relaxing some standards is good for company morale. I would say that public acceptance may not be so easy.

2. Professionalism. The Stigma Of Tattoos.

Tattoos have become a norm for many of the younger crowds and perhaps more flight crews will sport body art with relaxed codes.

The public may accept these new policies of United Airlines, which you may read here,  which may lead to more companies allowing the tattoo since some airlines allow tattoos but they must be covered with makeup or bandaging.

The degree of professionalism certainly should not be degraded and tattoos do not reflect poor airmanship. That may or may not be accepted by passengers as some say they will fly other airlines with stricter policies.

Many other Airlines require any tattoos or body “art” to be completely covered by uniforms and I suspect that many Airlines will wait to see the public reaction to these new policies at United and Virgin Atlantic. I believe most companies will follow suit.

New aspiring Airline Flight Crew members would be well advised to review Airline policies before choosing to acquire tattoos or piercings. Especially if you have chosen your dream job with your dream Airline.

United and Virgin Atlantic seem to be the most lenient companies at the moment when it comes to policy changes.

Canadian Airlines have recently had Union support in changing the policies regarding tattoos and piercings as well.

Citing morale of Cabin Crews and the former policy as “unreasonable and discriminatory”, by the Union, crews can have more freedom in appearance without fear of discipline.

United will allow hair to be down providing it is shoulder length and nail polish can be worn.

I did not discover any other major carriers with significant changes for tattoos or other changes to their dress codes. That does not mean they are not considering or already implementing new policies.

Keep in mind that there are still some rules to follow regarding the display of body adornment.

The size of the tattoo and the number of piercings and size allowed by carriers are still things that must be considered. So before heading off to the parlor it would be well advised to check the company policy.

Remember to “keep it clean.” Use discretion in your choice of tattoo and refrain from being offensive or insulting to others.

I think these changes are geared toward creating higher morale among employees stemming from the ever-so-prevalent pandemic and the huge layoffs that recently occurred.

I am not a fan of tattoos and piercings since I belong to the older generation. Tattoos were on military men symbolizing their service in WWII and other conflicts. It was rare to see other tattoos and rarer still on women.

Times have changed and it is rarer to find young men and women without some body art.

I do not find it offensive unless it is in very poor taste so I withhold judgment and see it all as a sign of the times.

Always be professional and exhibit good taste as well as exceptional airmanship and I think the public scrutiny will lessen with time.