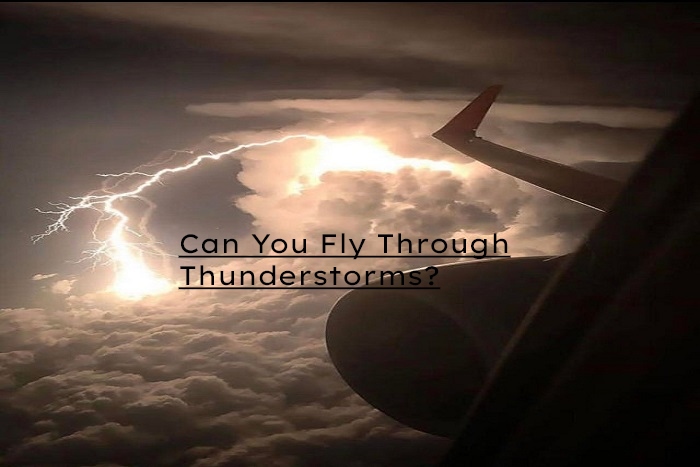 Have you ever wondered “Can You Fly Through A Thunderstorm?”

I have always thought thunderstorms were beautiful to watch from the ground and in the air.

Throughout my years in aviation, I have had the opportunity to observe many thunderstorms. Also the bad luck of having to fly through them because it was the only alternative.

I hope this article will give people a better understanding of this weather phenomenon.

Can You Fly Through a Thunderstorm?

Yes, you can fly through a thunderstorm if it is the only alternative.

It always is the best practice to avoid any type of dangerous weather.

1. Are Airplanes Safe To Fly Through Storms?

When aircraft are being designed they are required to meet ALL safety standards and they are designed beyond those limits.

Airframes and wings are twisted and flexed until they break and then they are strengthened beyond those limits. This assures that they are safe to fly in the most severe weather. Airplanes can take a beating and come out safely.

2. Why Are Thunderstorms Dangerous?

Most people have likely have seen Thunderstorms form.

They always form from three things, moisture, unstable air, and lift. Warm unstable air near the ground with cold dry air above and the differences in air density cause the warm air to rise. As the warmer less dense air rises into the colder air the storm clouds will begin to form.

The amount of moisture in the air will be a factor in the size and height of the storm. These storms can form very rapidly and can reach altitudes of 100.000 feet.

Within the storms, there are tornados, simultaneous strong updrafts, and downdrafts, heavy rain, hail, lightning as well as ice.

These factors make it very unsafe for any aircraft yet we still have aircraft accidents related to these storms.

The accident rate for aircraft accidents due to storms is very low because these storms are avoided. During the 1970s through the 1990s, there were several accidents around the globe that were caused by thunderstorms.

3. Safety Considerations For Flying in Weather

As I stated above the airplane is safe however there are some other points that need to be considered.

Today’s weather satellites provide the National Weather Service and ATC (Air Traffic Control) with an extraordinary level of seeing actual weather on the Earth’s surface. You may read about state-of-the-art weather satellites here.

This allows pilots and dispatchers the ability to evaluate flights in real-time and build flight plans that avoid severe weather. The onboard weather radar systems build yet another level of safety.

The other consideration is that today’s airliners fly above the majority of weather systems. They still need to be well above any turbulent cloud tops and the biggest and tallest storms are the ones that need to be deviated away from as they are the worst.

4. Taking Off or Landing In a Thunderstorm

This is never a good idea. There can be microbursts that can exceed 6000 feet per second which is enough force to push a landing plane into the ground. An aircraft taking off would likely never be able to climb and unfortunately, these types of accidents still occur.

Most airports with control towers have wind shear measuring equipment which helps the decisions made by the pilot.

Most of us that have done any type of flying as a passenger or a pilot has experienced flights that were far less comfortable than we would like.

Seeing lightning flashes and hearing thunder while looking out the window of an airplane can cause a great deal of anxiety.

An aircraft is inspected after lightning strikes to determine the entry and exit points and repair subsequent damage. The aircraft can then be returned to service.

Aircraft do have protection from lightning strikes that help resolve issues with the high amperage from the strike.

6. What About Private Aircraft?

This leaves aircraft that are well equipped but cannot fly in the flight levels and must fly through the weather as opposed to flying over it. This can be done safely as well but does require a pilot to pay very close attention to current weather and forecasts.

The single-engine piston-powered aircraft really should not fly in extreme weather. They are simply unable to handle the weather, in my opinion. Many will argue this but I stand by the statement. There is a saying among pilots, “It has two emergencies before you leave the ground, it’s  a single-engine and piston-driven.”

I hate reading aircraft accident reports. Especially ones that could have been avoided.

The majority of these hours were flown in mountainous terrain throughout the Western states of Montana, Wyoming, Colorado, and Utah in the most severe weather that can be thrown at you. We were only stopped by our destination weather below minimums and forecasted to remain that way. And then we flew to the alternate, or if we had not departed waited for the weather to improve.

Flying through an area of thunderstorms and squall lines at night was not the best duty, but the job had to be done.  At least at night, you could see the concentration of lightning and the antiquated radar would at the minimum show the highest levels of precipitation, so you pick the area with the least echos and tell ATC the heading you need to fly to be as safe as possible.

Then suddenly you break out into clear calm air and you start to breathe again.

You can try your luck flying into these monster thunderstorms, but I would rather stay at home and fly another day!

My advice is to give Thunderstorms a wide berth.

RELATED: Can You Fly Through Cumulus Clouds? (5 Weather Facts)