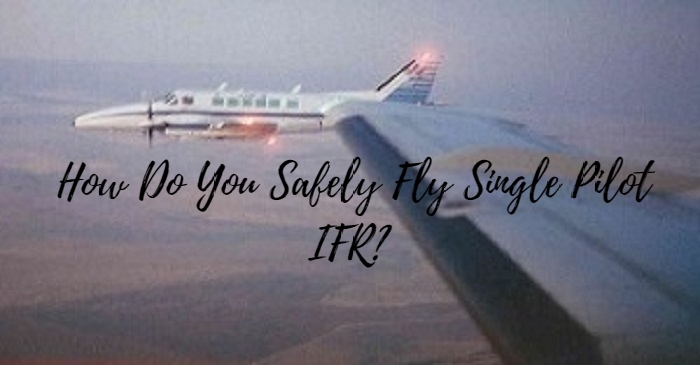 After many years of flying night freight runs flying alone hauling feeder runs for UPS, FedEx. Airborne, and the U. S. Mail I thought about how I had taken the safety of each flight for granted. It came easy for me so I thought I would try to answer the question, “How do you safely fly single-pilot IFR?”

How Do You Safely Fly Single Pilot Fly IFR?

The safety of any flight must always have a safe outcome that begins on the ground and flying single pilot IFR takes a learned skill. Excellent training, careful planning, and the execution of that plan will result in the desired outcome, You must be vigilant and situationally aware at all times.

I would venture to guess that nearly every newly rated Instrument Pilot had some degree of apprehension executing their first flight in the weather. Most likely the same feeling as doing the first solo.

How Do You Safely Fly Single Pilot Fly IFR?

1. Are you afraid to fly single-pilot IFR?

My first weather experience was a sweaty palm ride flying a Cessna 182  requesting an instrument approach into Kalispell, Montana. My desire to be home was greater than my fear of flying an approach.

I knew that I could fly an approach. I just needed to apply everything I had learned and execute the learned behavior of instrument flying. There was still the fear of making a mistake because there were mountains nearby.

Or more likely to make a flagrant mistake that caught the eye of Salt Lake Center and got my A** chewed. Then told to call them immediately on the ground.  I was lucky enough to bypass that admonishment.

That experience opened up a new world for me so the only limits were the severe weather and ice due to the limits on the 182.

Once I had an aircraft with ice protection I was more confident but I knew I still needed more experience.

Gaining that type of experience is truly a challenge.

Consideration must be given that as a norm single pilot crews operate in a different venue than two or three pilot crews who fly larger and faster aircraft at higher altitudes.

3. How Safe Is Single Pilot IFR?

Single-pilot operation accident statistics show rates several times higher than two-pilot crews but the exposure to weather in the lower altitudes where many of these flights operate can be some of the reasons.

My first experience flying single-pilot, (Part 135), IFR was one of the worst weather flights I had ever taken and it did create a lot of nervousness.

This flight would take me across the front range of the Rocky Mountains from Billings to Kalispell, Montana through a wall of thunderstorms.

I knew that I could do the flight and I had an airplane that could handle the weather. Safety was never in doubt or I would not have gone. It was more a fear of making a mistake than a lack of ability.

The result was a new confidence in my ability to fly in any circumstance and it led to the discovery that single-pilot IFR was quite safe.

All pilots must remember that they have the right to refuse a flight and I did that myself when safety was questioned. I was never reprimanded for my decision.

Single-pilot IFR flights are conducted with the confidence of the Pilot in command as any doubt will surely test your merit.

Every flight begins with you the pilot and that requires self-assessment to assure you can safely fly. Your life, the equipment, and the passengers or cargo are at stake so a pilot must be at their best.

Flight planning for the departure, route, altitudes and arrivals for filing the plan should be completed. This is a critical step in the safe outcome of the flight so check and double-check the accuracy. Be familiar with the guidelines for flight planning from the FAA, which you may access here.

If you have your load data you can complete weight and balance numbers, if not the numbers are completed before departure.

Next comes the thorough examination of the aircraft and its logbooks to assure all is as it should be. Once satisfactorily completed a fuel order can be placed which includes the necessary fuel reserves for the destination, the alternate, if needed, plus a 45-minute pad for safety and a little more if the weight permits as a fudge.

There is no excuse for running out of fuel and it is a really s****y feeling to have fuel become critical. Sometimes the company may require minimum fuel amounts to be purchased at outstations so one needs to have a sharp pencil.

The weather becomes the next consideration with reading all the pertinent reports for each destination that includes current weather and forecasts, winds aloft, and any Notams and pilot reports. Then it’s followed up with talking to a weather briefer for their outlook and anything that might have been missed.

Now it is time to file the plan.

5. It Is Time To Fly The Airplane.

Time to ready the aircraft by supervising the loading of cargo and or passengers and baggage and to assure that the airplane is loaded to the weight and balance computations. Make your final lap around and be sure fuel caps are on and tight and all compartments are closed.
Now it is time to fly. Don’t forget that all checklists must be completed.

From this point forward you need to be thinking ahead of the airplane. This is not difficult, but mandatory. Break everything into segments, write it down so you can remember, and add the next segment to your list. “The strongest memory is many times weaker than the dimmest ink.”

If you are flying the same route daily never let your guard down because the moment you do you open yourself up to making a mistake.

This article was one I had to really give some thought to because I wanted to be able to describe flying alone in the winter in the Rocky Mountains. I flew the majority of my time in Beech 99 Airliners which likely averaged 25,000 hours on the airframes. I MIGHT be conservative in that number.

These airplanes were devoid of autopilots so they all were hand flown. The company felt autopilots were heavy and too expensive to maintain. Likely true and I liked to hand-fly anyway.

We operated in all types of weather and always at night so excellent instrument skills were and are mandatory. We flew in the mid-teens in altitudes except in Colorado but never-the-less we flew in the weather and not above it.

I never really minded the bad weather but I would lie if it had not made me nervous at times.

An airport can be a very quiet lonely place in the middle of the night especially when a blizzard is blowing below-zero wind and snow at 30 miles per hour out of the North. The rest of the World is tightly wrapped in the warm comfort of their homes. The sane ones anyway.

When you hear the drone of a lonely twin in the darkest of night it is likely a freight dog.

Related:  How Safe Is Mountain Flying?  (Some Bumpy Thoughts.)