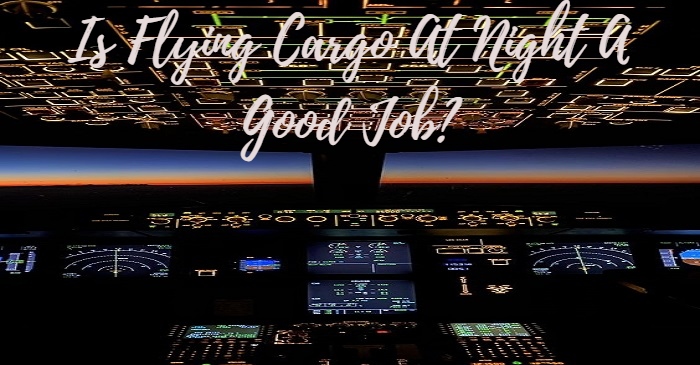 During my first few years, I flew feeder for Airborne Express in a Piper Navajo out of Denver Stapleton Airport in the early morning hours with a return in the evenings. I was then offered a chance to fly night freight from Billings Logan Airport flying U. S. Mail at night to the Flathead County Airport in Kalispell, Montana, and I wondered, Is Flying Cargo At Night A Good Job?

Is Flying Cargo At Night A Good Job?

In my humble opinion, night operations flying cargo is the best possible job a pilot can have. The sky is literally all yours for apparent reasons as people like to travel in daylight. One must face a few challenges in the dark, but the job is excellent.

Is Flying Cargo At Night A Good Job?

Daytime is the time of the highest congestion in the sky. Airline and General Aviation, (Corporate and private), departures, and arrivals are the highest causing possible delays with the added load on ATC as well as ground personnel. Support is first come, first served after the Airlines for fuel or other aircraft needs so you need to have well-laid plans for maintaining on-time schedules.

Air traffic control centers have much more time to devote to individual aircraft in the lower density traffic areas which makes it much easier for aircraft to get requests filled quickly and this can be a great advantage if a need like weather-related issues and altitude or direction changes.

Flying a night freight run is a very peaceful place to be. It is just you and the airplane and on clear nights there are many things to see when your workload is diminished.

A. Finding New Worlds In The Sky.

I saw things unexplainable in our world of science. Perhaps even in time and space.

One night about midnight on a 2 1/2 hour trip my First Officer and I observed an object on the Northern horizon above the Canadian border that caught our attention due to its brightness that traveled east to west at an incredible speed. The straight line of flight and consistent altitude and speed made plausible explanations null.

On my occasional daytime flights, I used a Forest Service map so that could learn all the names of the mountain peaks on my route both for knowledge as well as a precise location in the event of an emergency landing in the mountains.

Mostly because I wanted to know the terrain in The Bob Marshall. Great Bear, the Scapegoat Wilderness areas, and Glacier National Park. I learned all the names of mountain peaks and relevant terrain from Kalispell to Billings, Montana.

That newfangled GPS system made it so easy to pinpoint exact locations so my workload was reduced. Now this A-DSB stuff is exact location worldwide so there is no place left to hide. A super cool tool.

2. The View Is Fabulous.

Night-flying views of the ground on VFR flights are far better than daylight flights.  It’s darn hard to find airports in the day when you are seeking a specific airport in an area that has many airports. The night airport beacons are a huge help, for example.

You have lights that make towns and airports super easy to find if you need to.

When that full moon exists on a clear night the world takes on a new texture and everything becomes a new surrealistic view. I felt like I had X-ray vision. I loved the flights at night.

A major plus for me was the ability to listen to the radio over my ADF that I could never hear during the day. I was in NW, Montana listening to KOMA in Oklahoma City. A big bounce and a plus, but I  loved it.

Today freight dogs are getting very good benefits and compensation. Regional freight carriers are having pilot recruitment problems just like all airline companies so they must remain competitive.

Pay for people I know personally are making 6 figures and starting wages are around 70K. These numbers are just guesses since the industry is changing so rapidly to accommodate all the world’s aviation needs. Pay and benefits may change a great deal as all the companies compete for new employees

Redbird Simulators wrote an aviation market survey that has some interesting statistics about all aspects of flight training during the year 2021 that you can download here. It is worth the read.

Night flying is something that takes some adjustment in flying habits. You need to be aware of the differences and the hazards that do exist.

This article is a discussion about a job flying cargo at night and how it can be a good job.

These cargo jobs, both day and night, were the positions that supplied airlines with well-experienced pilots. The ” freight dogs”  were pilots that had the fun of flying in all types of weather and only below-minimum weather situations kept these pilots grounded.

This is an aspect of airlines that I question today. We must have properly trained and experienced pilots available and trial by fire does not exist in a simulator.

You can do all the training in a sim that you want but there is no way to really show a pilot the real feeling you have when each decision you make better the right one or you are likely a fatality. You cannot die crashing a simulator.

I hate the feeling that I wished I was on the ground and this flight from hell was over. Good old Murphy’s law, If it can go wrong it will at the worst possible moment.

I once had a sim session in the Boeing 727 that lost all hydraulic power on the final approach so the flight controls were nearly impossible to move. It was just muscle power and the controls were extremely heavy. I  crashed the sim 3 times trying to land.

Relevant: What Can You Do With A Commercial Pilot Certificate? (The Sky Is The Limit.)