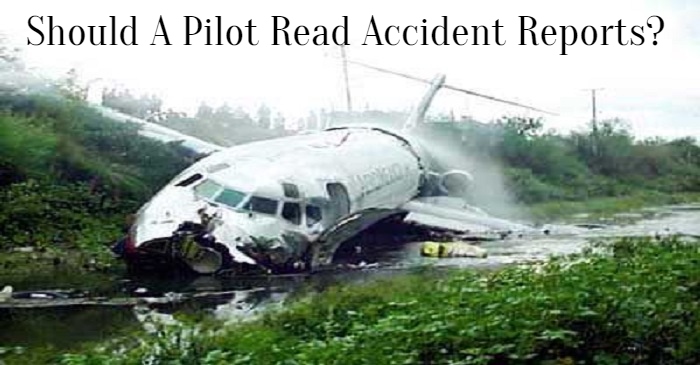 Over the years I have heard many opinions concerning aircraft accident reports. Did you ever ask yourself, should a pilot read accident reports? Many pilots do not read them and perhaps do not know how to access them. I think they are very relevant to learning to be a better pilot.

Should A Pilot Read Accident Reports?

Aircraft accident reports are one of the best tools for learning about equipment malfunctions and mistakes pilots make while flying. They are superb in identifying common mistakes that lead to injuries or fatalities.

Should A Pilot Read Accident Reports?

1. Where Do You Find Accident Reports?

The NTSB, (National Transportation Safety Board), publishes all aircraft accident and incident reports each month on a daily basis. You have access to them here.

These reports are essential tools available to pilots that cover detailed reports on aircraft accidents and incidents. They afford a pilot insight into the chain of failures that occurs to pilots and crews that may have been avoided.

2. Is The Information Useful?

There was an accident fatality in San Diego Ca. on November 5, 2022, that could’ve been easily avoided if the pilot had been aware of how to avoid it. This pilot was doing touch-and-go landings when he encountered a runaway trim. He told the tower about this and later after being cleared to land he was told to offset the runway and continue without landing. The pilot again said he had the trim issue and needed to land. He landed on the grass to the right of the runway and was killed on impact.

This pilot’s death bothers me since it was such a foolish way to die. These types of deaths simply appall me and haunt me because of the senselessness.

This Cirrus pilot was either not trained on electric trim in the airplane or he forgot what he was told to do in the event of any electrical failure.

My first time in a Cessna 182 with electric trim I was trained to know where the circuit breakers for all electrical in the aircraft were I was then told to apply opposite trim and if need be physically stop the manual trim wheel.

Pull the circuit breaker. If all else fails shut off the electrical master switch.

3. An Accident That Baffles Me.

On October 18, 2022, a King Air E90 with two commercial pilots on the .flight deck was on short final, cleared to land, and suddenly pitched down and spun into the ground in a car dealership parking lot. Both pilots died in the crash.

The Beech King Air E 90 is a gentle aircraft that performs very well in any configuration so a stall spin accident just does not seem plausible unless something happened that caused the controls to be manipulated in a fashion to create a stall/spin.

A bird strike that hit both sides of the glass could be plausible if remnants are found. This would be stretching the imagination but maybe the ensuing fire was so hot that the bird was incinerated. Unlikely at best.

My take on this is unless some insurmountable evidence rears its head that the report will be “pilot error,” as most questionable accidents seem to be classified. It is never closure.

I cannot speak for all Airline CRM courses, but the ones I flew for had classes during recurrent training that covered any issues that were consistent with the operation.

We received many articles sent out by the DO, (Director Of Operations), about any new information or accidents on a regular basis.

It’s made a sizable file. Occasionally I spend time and review the articles and I look at new accidents/incidents on the NTSB reports. I like to keep up on top of these.

The CRM classes I have attended have all been very beneficial and always have a resulting lively discussion on safety topics. Along with some that baffle even the most experienced pilots.

I am of the opinion that these accident reports will help every pilot.

As I said, the Airlines make these available both in class and in correspondence from the D. O. or the Chief Pilot’s office.

I realize that new pilots and likely many Private Pilots do not know these reports are available.

I think every instructor should introduce students to NTSB reports.

It is not a hugely time-consuming task to find these online and read through the reports at least checking out some that pertain to your type of flying. It is worth the effort.

I am deeply troubled by accidents that really don’t seem possible and there is no answer to why they happened.

I have lost a lot of friends in accidents that do not seem possible, I lost a good friend and one of the best I knew both in the shop as he was an A&P mechanic as well as a Captain on the Beech 1900. His aircraft was lost shortly after take-off on 28R in  Billings, Montana.

The aircraft was loaded with U.S. Mail and crushed in a parking lot just East of the airport and of course, no reasons were found so it became “pilot error.”

Leave a comment. Fly safe. Be a better pilot every time you fly!

Related: How Dangerous Is Flying In Ice? ( Some Freezing Thoughts)