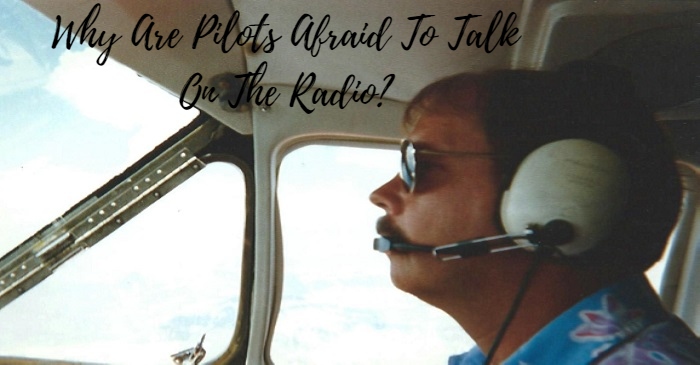 When I was flying  FAR Part 135  Freight runs in the Northwestern United States I ran across many Pilots with an average of 900 hours total time. They signed on with the company to acquire 100 hours of turbine time or more and actual experience. They were mostly all reluctant to talk on the radio.  Why Are Pilots Afraid To Talk On The Radio?

Why Are Pilots Afraid To Talk On The Radio?

It is just the fear of not knowing what to say, plus the lack of knowledge of the language that pilots and air traffic controllers. It is one of the easiest tasks a pilot must perform.

Why Are Pilots Afraid To Talk On The Radio?

1. The Fear Of Airplane Radios.

I flew with a lot of Pilots that were deathly afraid of talking on the radio. But since it is the job of the pilot to communicate with air traffic control it is a must-do item.

Although I cannot say for certain most of the pilots that were afraid of the radios just didn’t know what to say. They had never been required to do so.

Also, many Pilots have only been talking to perhaps a Unicom frequency at an uncontrolled airport or a control tower and rarely ever having to deal with any of the ATC Centers.

The solution in my situation was simply to get the co-pilot to talk on the radio and if they needed my help I was there. Essentially any co-pilot that flew with me got to do the radios until they were comfortable. No matter how long that may have taken.

Flying every day on a regional US Mail run over the same route of flight in the Rocky Mountains made it lots easier for people to get comfortable on the radio.

Even those with the greatest fear of radios could catch on rather quickly.

2. Learning The Language Of Pilots.

Talking on the aircraft radio does require some concentration because the language that is spoken is usually numbers.

What it really means is that every communication between an aircraft and air traffic control must be clear and concise.

It is imperative that pilots and controllers clearly understand each other.

This can make the airplane radio a very uncomfortable item. Especially at a very busy high-density Airport.

I highly recommend learning the phonetic alphabet as soon as you possibly can because all letters of the alphabet are used phonetically in all aircraft transmissions.

For example, if you are flying an airplane with a call sign of N52308  you will identify yourself on the radio as November 52308.

All Airport automated weather observations will also use the phonetic alphabet starting with the letter A or Alpha.

These broadcasts are always hourly unless there’s a significant change in the weather conditions. So every hour there will be a change in the letter identifier.

Here is a link to the Federal Aviation Regulations on radios that you should be acquainted with.

3. How To Build Your Confidence With Airplane Radios.

Experience and practice will build your confidence in using the airplane radio dramatically. If you don’t fly a lot it might become a little bit more difficult.

Listening to aircraft and air traffic control conversations can help build your confidence rapidly. It will help you overcome a fear of saying the wrong thing.

There are numerous ways to listen to these, obviously, there’s the airplane radio, but you can listen to Live air traffic-control conversations on YouTube channels, or if you prefer you could buy yourself a handheld aircraft radio and listen using that.

It’s not a bad idea to invest in a handheld radio that you take with you on your flights in case of radio failure in the airplane.

The more time you spend listening to these radio conversations will help you build your confidence quite rapidly.

If you do happen to make a mistake don’t waste the time beating yourself up just learn from the experience and remember not to make the same mistake again.

If you take the time to listen and learn and have a little bit of patience with yourself aircraft radio work will become quite simple.

Don’t forget to use a notepad on a pen to write down instructions that you are given so that you don’t have to work so hard at remembering.

Making things simple will help you with your flying as well. The less time you spend trying to think about the right thing to say on the radio will allow you to spend more time learning to fly the airplane.

It is absolutely normal to feel some apprehension about talking on an airplane radio but it really doesn’t have to be very difficult. It’s all up to you.

You’re going to be talking on the radio from the very first flight lesson you take so you’re going to have a pretty general idea of what needs to be said.

There is no shame in asking your instructor for help which they will gladly give to you to give you a boost in confidence.

Rest assured that we all started from the same place learning to fly and talk on the radio and no one will make fun of you for making a mistake.

I spent a lot of time teaching Pilots and it was quite often that I had pilots flying with me that really needed to be given some extra time to learn how to talk on the radio. Everyone learned how to do it in spite of their fear.

Pilots using English as a second language were probably the most difficult people to teach radio work partly due to heavy accents and again a great amount of fear. But those issues were rapidly worked through.

And don’t forget the pen and paper. Write it down. “The strongest memory is many times weaker them the dimmest ink.”

It’s also important to be very clear and concise with radio transmissions.  Airplane radios aren’t for chit-chat. So think about what you have to say and do it in as few words as possible.

You will find out how important that is the first time you are subjected to a very busy Airport.  You will also find out that is very important to listen carefully to the radio all of the time because the controller may give you new directions at any time.

The airplane radio will really become a very simple tool in a very short time. Be patient with yourself and practice.

Many directives given to a pilot by air traffic control must be read back so that the controller and pilot are on the same page  A good way to practice that would be to listen to your handheld aircraft radio, or Youtube videos, and read back the instructions just as you would if you were flying the airplane.

Don’t let the airplane radios intimidate you. You will become quite proficient in the use of them in a very short time. You will also have many opportunities to hear other pilots make mistakes on the radio. It happens to everyone.

Related: Why Do Pilots Say “Niner”? 5 Things about “Pilot Talk”