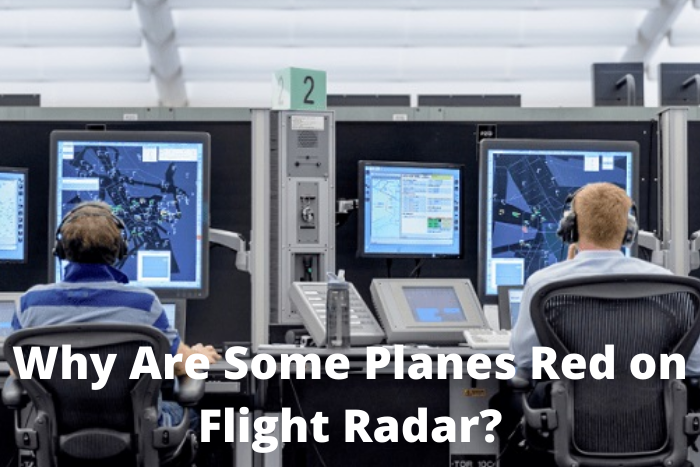 Have you ever wondered, “Why are Some Planes Red on Flight Radar?”

Not many years back in aviation history flight following was very difficult.

There just was not an easy way for anyone to know the location of an aircraft. When radar came along it opened a multitude of radio-tracking technologies.

Why Are Some Planes Red on Flight Radar?

Aircraft appear in “Red” on an  Air traffic control radar scope whenever they change the”squawk’ code on the aircraft transponder to reflect a loss of radios, code 7600 or an emergency, code 7700, or 7500 for hijacking.

The transponder was the first item that came along for aircraft to install for aircraft ID. It gave the position of the aircraft but it was dependent mostly on land-based radar.

It was one of those items that became controversial as it was another expense for the airplane that the little guys whined about because they were expensive. It was not long before they proved their value.

The transponder was the little box on the panel where the “squawk” code went.

A few years later it became required to have the transponder with the capability of altitude reporting.

A squawk code is a four-digit code given to an aircraft by ATC to identify it. Each aircraft in the airspace will have a unique code for this purpose.

These individual codes are also used for important communications from air to ground.

A list of relevant transponder codes can be found on Wikipedia here.

Radar technology came about in Germany in the 188o’s when Heinrich Hertz began experimenting with electromagnetic radiation, but serious development with radar did not begin in earnest until the 1930s.

WWII rapidly advanced radar and it became an asset to the Allies as well as their enemies.

Most of us can remember the large radar domes that were used until the satellite technologies advanced aircraft tracking capabilities even further.

Today we use both the terrestrial radar and the satellite radar for aircraft identification,

ADS-B is a surveillance system that today is used in conjunction with radar to surveil an aircraft through satellites to further advance aircraft tracking and navigation.

It is “automatic” as it requires no pilot or external input and “dependent” since it operates from the aircraft’s navigational system.

This allows for far more coverage worldwide since we can see aircraft in the very remotest area of the earth where no radar coverage exists.

ADS-B also allows other aircraft to be detected and the receiver reports pertinent information from aircraft to aircraft which helps the pilot’s situational awareness and aircraft separation.

I have used Flghtaware and  Flightradar and they are both very accurate. Most airlines have user-friendly programs available that you can use for tracking flights.

If you’ve never used any of these programs I suggest you have a look, You have every flight worldwide at your fingertips and you will be amazed at the number of aircraft flying at any given time.

You can see all the data about each flight which tells you what company, its departure/arrival airport, altitude. speed, and time en route, and as we noted above the squawk code which now we know will be red under certain conditions.

It has been just a bit over 50 years since the transponder came into aviation. All of the aviation technologies seem to have exploded and there’s no question about their need.

Safety in flight has improved immensely because of the innovative ideas.

The density of air traffic worldwide is mind-boggling to me. I never imagined the growth back in the 1960s.

Air transportation will continue to rise and become more and more taxing on the system of management.

It is essential that we manage air travel with utmost care and continue to advance technology for that means.

We have the flying car just on the horizon, just imagine the added tax on aircraft separation.

RELATED: How Do Commercial Airlines Calculate Weight and Balance?