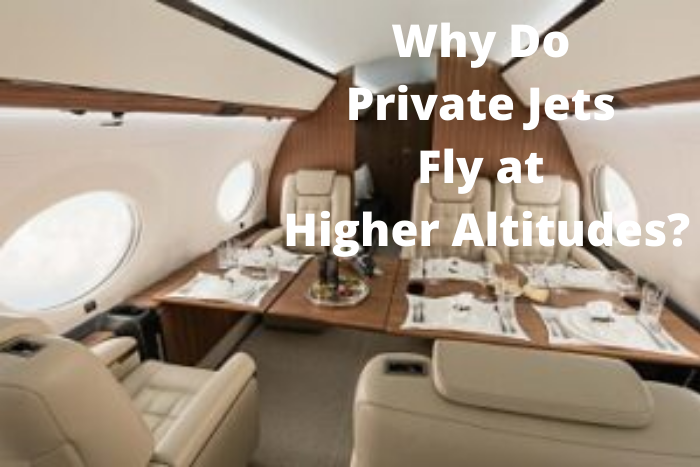 I have been actively involved in aviation for over 50 years so I really didn’t even think about that question because I knew the answers. I was more consumed with the thought of “Why I wasn’t the one flying in those private jets?”

Maybe some people don’t even realize why private jets fly at higher altitudes, so in this article, I will tell you the reasons.

Why Do Private Jets Fly at Higher Altitudes?

1. Stay Out of The Crowd (Commercial Traffic Avoidance)

I like the idea of being as far away as possible from anything that is coming at me at speeds in excess of 500 mph especially when I’m traveling at that speed as well.

The private jet has the privilege of being able to fly higher so it’s beneficial to avoid the congestion of the lower altitudes. At any given moment in time, there are approximately 5000 jets in the air in the United States alone.

Global air traffic can be roughly as high as 100,000 flights per day taking off and landing.

2. Let’s Stay Out of The Soup (Weather avoidance)

It is a really nice feeling to have the privilege of being able to climb above the weather in any airplane.

I flew regional freighters for years down in the weather and I experienced every kind of imaginable problem. Icing, turbulence and thunderstorms being the worst.

When you have the ability to fly at higher altitudes much of the stress of flying is reduced.

The exception to this is the thunderstorm which can sometimes reach as high as 66,000 feet.

Some of today’s private jets have a service ceiling ( the maximum altitude reachable without compromising aircraft stability) of 51,000 feet.

Even at that high altitude the passenger comfort is exceptional as the pressurization system allows for it comfortable 4850 feet inside the cabin.

Airlines make the most profit when the airplane is full so it is quite heavy thus the climb ability as altitude increases becomes reduced. This makes it less profitable to continue to climb to higher altitudes. This is because it is not fuel efficient to continue to climb. You’re burning too much fuel.

Private jets are usually much lighter and with the powerful engines that they are equipped with they climb to higher altitudes quite rapidly.

As you climb the density of the air becomes thinner which allows the aircraft the possibility of flying at much greater speeds.

When you’re a pilot you will often hear the radio chatter from the airlines asking air traffic control if they have any ride reports.

They are asking for a more comfortable altitude where there is less turbulence or weather phenomenon. It’s all about comfort. People don’t like to be bounced around in an airplane.

The private jet obviously is the very best for affording comfort for the passengers and the pilots. You are flying in the best the world has to offer in aviation.

Flying in a private jet is the best comfort that the world has to offer without any question.

You are assured that you are in the safest most comfortable aircraft and the pilots can take you to an altitude where you’re way above all of the clutter of the world’s airways.

Not only does it give you these benefits of comfort but you will arrive at your destination far faster and assuredly well rested.

Safety is the most important thing in aviation. Knowing that your pilot and crew workload is reduced by flying high above the weather and the turbulence should give you added peace of mind.

Let’s all go “High and Pressurized.

CHECK OUT: Can Commercial Planes Fly Over Hurricanes?