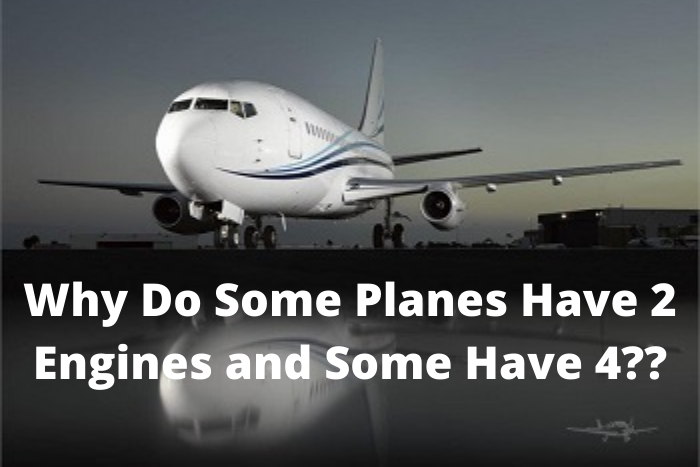 “Aviation in itself is not inherently dangerous but it is totally unforgiving of any inability, incapacity, or neglect” (unknown)

I’m sure people wonder, Why Do Some Airplanes Have 2 engines and some have 4?

I also think that most people don’t realize that four-engine airplanes date back to World War One. They were used as strategic bombers and airliners and flew as early as 1913.

It is logical to some people that having four engines is far safer and perhaps others think maybe the airplane will go faster. They sometimes did fly faster.

There are numerous reasons throughout the years that made the four-engine airplane the aircraft of choice and of its demise.

Why Do Some Planes Have 2 Engines and Some Have 4?

Igor Sikorsky built the first four-engine airplane which was designed and built for carrying seven passengers with a crew of three. The first flight of this airplane was in 1913. It had two enclosed cabins for the seven-person capacity and the cabins were large enough for people to stand up and move around.  You can read more about that here.

Then came along World War One and it became necessary to build airplanes that could carry as much capacity as possible. So guess what? Igor Sikorsky’s airplane came in #1 again for the 4 engine airplane to become a strategic bomber.

Mr. Sikorsky was an incredibly talented and innovative man in aviation and I’m sure most people have heard his name although mostly attributed to helicopters these days.

When the first four-engine airplanes were built and up until new jet engines arrived engine failure wasn’t uncommon so in order to fix the problem they put four engines on the airplane.

Having four engines on the airplane increased the power to accommodate longer distances, higher altitudes, and greater capacity.

In the eyes of the people that make the rules, the four-engine airplane was safer so it made it possible to fly long-distance oceanic flights. You could get home on three engines which made it sound like it was no big deal to lose the engine.

I remember a movie with John Wayne called “The High and The Mighty,” about a DC-4 (four engines) with an engine failure flying from Honolulu to San Francisco. It was a flight of panic by all aboard, except for John, the aging demoted copilot, who saved the day. After all, it is John Wayne!

3. It is Called Redundancy

Some people have said that having four engines on an airplane gave better redundancy so they were considered safer. I don’t particularly like that statement because having four engines gives you more of a chance to lose an engine. Maybe that’s why they figured it was redundant.

It is necessary to point out that the loss of an engine in flight is an emergency. However, the pilot in command makes the decision as to whether to declare an emergency because it all depends on the severity of the malfunction. The PIC is the one to decide whether to continue or divert.

As the redundancy issue continues the jet engine makes its debut. The four-engine jetliner comes on the scene and changes aviation considerably.

The airlines made a considerable amount more on profit for each flight because they could put more passengers on board. The cargo industry also had improvements in revenue because of the larger payloads which is something that will continue for a limited number of years as the airlines’ phase-out 4 engine planes.

ETOPS  means that a twin-engine airplane can operate over a route that contains a point that is greater than an hour flying time at the approved one-engine inoperative cruise speed.

That allows a twin-engine airplane to fly over routes that were only allowed with three or four-engine airplanes which means the airline has the opportunity to fly a less expensive airplane.

6. The End of Another Era

The bottom line is that we will no longer be seeing the magnificent jumbo jets with four great big engines. It isn’t practical to fly them anymore.

The technology of the jet engine has advanced at an amazing pace. Because of this, the reliability of the engine and the amount of thrust it can produce makes flying a twin-engine wide-body airplane the “only way to fly.”

New twin-jet airplanes are so much cheaper to fly and maintain that they’re putting the four-engine jet out of business.

Both Airbus and Boeing are phasing out the four-engine airplane production.

The question of why do some plans have 2 engines and some have 4? won’t be asked anymore in the future.

I suppose they’ll be wondering what happened to the four-engine airplanes.

I remember seeing the first 747 that was ever built in Seattle in 1969 at Boeing field and I was completely in awe of its gargantuan size.  It was hard for me to comprehend the thought that it could fly and being the airplane nut that I am I wanted to fly it. As time went on they got bigger and bigger.

I hope that this article has given you some insight into four-engine and two-engine airplanes.

To me, there is a certain amount of sadness that goes along with the loss of these four-engine behemoths. I’m sure that there will be a time when you can only see one in a museum or perhaps the Smithsonian Institute if they can find a building big enough.

P.S. The 747-800 pictured at the top is a private palace that belonged to Qatar and is a flying palace for VVIP’S!  WOW.

CHECK THIS OUT: Can Commercial Planes Fly Over Hurricanes?