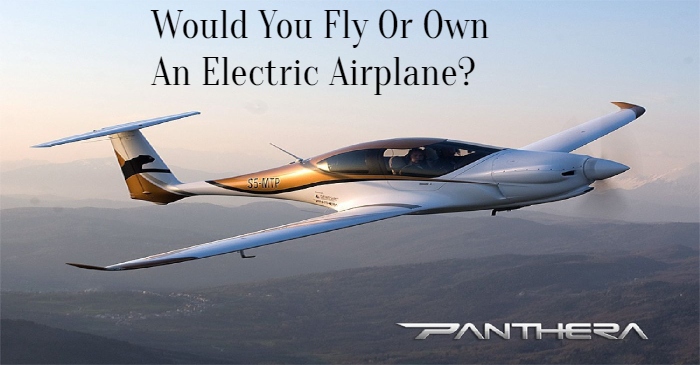 Had someone mentioned flying an electric airplane back in the early 1970’s I likely would have just laughed and said, “It will never happen?” I  have eaten my words. They are here.

Would You Own Or Fly An Electric Airplane?

I would definitely buy and own an electric airplane.  Today electric airplanes have been proven to be quite excellent trainers. They are considerably more economical than their gasoline-powered counterpart.

Would You Own Or Fly An Electric Airplane?

These trainers are proving themselves to be quite efficient for Flight Training.

Pipistrel Aircraft company has developed an aircraft that will sustain flight for 1 hour plus a 20-minute reserve which is more than sufficient to give a student a one-hour lesson.

I cannot comment about performance because I have never flown one.

Pipistrel seems to be out in the lead by having FAA (Federal Aviation Administration) approval and actively training pilots in their flight schools.

Bye Aerospace has another trainer that seems to be a good choice as well. They are slated to be the front runner with “Birde” which is a flight school that is a start-up for women pilots that Elle Lear is heading up. She is a granddaughter of Bill Lear (Learjet)  and I think she has a great idea for training women.

Let’s talk a bit more about Bye Aerospace and the eFlyer 800 whose performance estimates are 320-knot cruise and a 35,000-foot service ceiling with a capacity of 8 with a 500 NM range with 45 minutes reserve.

The safety features are two wing-mounted engines each with two redundant motor windings, quad-battery packs, (If one set of batteries fails there is a backup set), and a full airplane parachute. It also has full emergency autoland authority and so much more. Read about this aircraft here.

Pipistrel Aircraft has the Panthera as well, which is an airplane designed for electric, hybrid, or mogas (low lead, high octane) use. It was unveiled in July of last year and it is purported to be a very efficient airplane.

It is being made in Slovenia and so far they have no marketing plans for the USA.

These will be 2 passenger aircraft to accommodate the electric components.

This will only be sold as experimental but will be available as a kit.

There are numerous electric aircraft seeking FAA approval but I have no knowledge of their certification status.

Now comes the hard part for me and I think as well as many others may feel.

Would you put your family on aircraft without a pilot? Not me.

These are being designed for the air taxi industry in metropolitan areas so in my opinion there is lots of work to do with how traffic will be separated.

Boeing and Airbus are already designing the pilotless airliner. I feel that this technology will be hard-pressed to be in service in the near future.

DHL has been one company already putting Autonomous Cargo Planes to work.

Some of these are intriguing in design as they are supposed to load and unload by themselves as well. They have a cargo mod that picks up the load and secures it and unloads the cargo at the destination.

You can read this interesting story here.

United Airlines has 100 all-electric (ES19), 19-seat Regional Airliners on order from Swedish Heart Aerospace for a start date before the end of the decade.

This is an interesting facet of aviation to me. I would love to have an eVTOL  (electric vertical takeoff and landing) machine.

These aircraft are appealing in the freedom that they could provide but how do we deal with traffic?

Right now battery technology still needs to improve for a long duration, but with the way the industry is meeting challenges every day, this could change drastically.

The Jetson One looks promising but only has a duration of 90 minutes.

Priced at $92,000.00 it is out of my range but I know their’s demand because they are well booked out into next year or more.

I am still quite skeptical about electric airplanes, especially those with no pilots on board. But it is the wave of the future.

My skepticism is not strong enough to keep me from having one and if it was an expense I could justify I’d have one.

So I would buy and fly an electric airplane with 2 seats and about 500 nm range!

The Pipistrel is a great trainer and likely fun but I would reserve final judgment until I actually flew one. It has proven itself.

If you are a true pioneer spirit then go test drive one.

I hear great things from those who have flown them. Especially the silence compared to combustion engines.

It is not looking to be a choice.

Related: Can You Become An Airline Pilot In A Year? (4 “You’re Hired!” Facts)