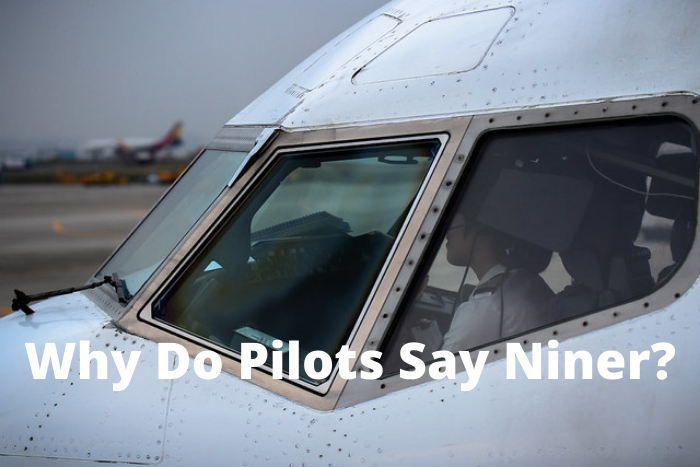 Why do pilots say “NINER?” Is that a word?  There is a good reason. Let’s find out the why.

Some call it the “secret” language of Pilots, but there are no secrets in the way pilots speak.

There’s a perfectly logical reason for it.

In this article, I will clear up any misconceptions concerning the language of Pilots and ATC. (Air Traffic Control).

Why Do Pilots Say “Niner”?

In aviation, it is all about safety. Being clear and concise on the radio is imperative to safety. The number 9 is pronounced as “niner” in order to distinguish it from other numbers like five (pronounced “fife.”) Also to eliminate confusion with the German word “nein” meaning NO!

1. The Funny Language of Pilots (A Numbers Game)

These pronunciations are used in order to assure that they are not confused with other similar-sounding numbers.

This might be a bit strange for people to rationalize, but clarity is a major safety issue in aviation. and since flying is a numbers game radio transmissions must be understood.

Pilots are required to repeat (read back) ATC instructions so that there is no confusion about instructions.

2. English, The Aviator’s Language. WHY?

English has been the chosen international language of aviation for many many years.

It may appear to some that because English was the chosen language that it is somehow prejudiced but that is not the case.

The English language is spoken as a second language in many places throughout the world and this is one of the primary reasons it is the language of Aviation.

At a 1944 convention in Chicago, English was chosen as the language of aviation to avoid misunderstanding or confusion over radio transmissions between international crews.

In 1951, the International Civil Aviation Organization,  (ICAO) recommended English as the language of aviation as well.

It may appear to some that because English was the Chosen language that it is somehow prejudiced but that is not the case. The English language is spoken as a second language in many places throughout the world and this is one of the primary reasons it is the language of Aviation.

The Federal Aviation Regulations state that in order to acquire a pilot’s license one must read, speak, write and understand the English language.

ICAO  has implemented standards for English-speaking proficiency as well and both organizations require that individuals acquire the skill of communicating in English.

4. It’s Not Just the Numbers

Pilots are required to know and understand the phonetic alphabet in order to be clear in communications as well.

The phonetic alphabet is as follows:

It is quite easy to misidentify letters of the alphabet and confuse them, therefore the phonetic alphabet is used for any letter representation.

Every aircraft has a registration number that is used for identification and is painted on the side of the aircraft. An example of this would be (N9SB or November Niner Sierra Bravo).

This identification is used anytime you speak with air traffic control or whenever you use the radio to identify yourself.

Some of the world’s worst air disasters were due to miscommunication.

An ICAO paper in 2008 states that 28,000 Aviation Safety Reporting System reports cite that 70% of these incidents were due to information transfer.

That is an astounding number that directly relates to Aviation deaths.

I learned early on the necessity of being very clear about what my intentions were.

It’s saved me from numerous incidents that could have been at the very least very embarrassing.

Many pilots that I flew with were from foreign countries and therefore English was their second language so it wasn’t uncommon for them to be a bit radio shy.

These weren’t the only pilots that were afraid of the radio and the best way that I found to teach them was to just let them get on the radio.

If they made a mistake it was easily corrected.

All of them learned to communicate well and do it very professionally.

Aviate, navigate and communicate. That’s pilot for; Fly the airplane, go in the right direction and then talk about it.

SEE THIS: What is the Sinking Feeling After Takeoff?